Buyers of the pound could not withstand the pressure from negative news, which are published almost daily in the UK. And so they retreated under the pressure of sellers, which led to a breakthrough of a rather important support level. The sharp rise in the unemployment rate, even with all the support measures provided by the government, is an extremely bad sign for the economic outlook in the UK. Hope for a trade deal is clearly not enough to keep the British pound at current highs.

The bulls currently need to defend support at 1.2924, since a lot depends on this level. It is unlikely for us to count on a divergence in these conditions, therefore, only a false breakout in the 1.2924 area can produce the first signal to buy the British pound. An equally important task will be to return resistance at 1.2991, where the moving averages are, which is playing on the side of the pound sellers. Settling above this range will open a direct way for the pound to reach the weekly high of 1.3056, where I recommend taking profits. In case GBP/USD falls further, and bulls are not active at the 1.2924 level, and this is more likely, it is better not to rush to buy, but to wait for an update on the next low in the 1.2848 area and then you can buy the pound there immediately on a rebound, counting on a 30-40 points within the day. 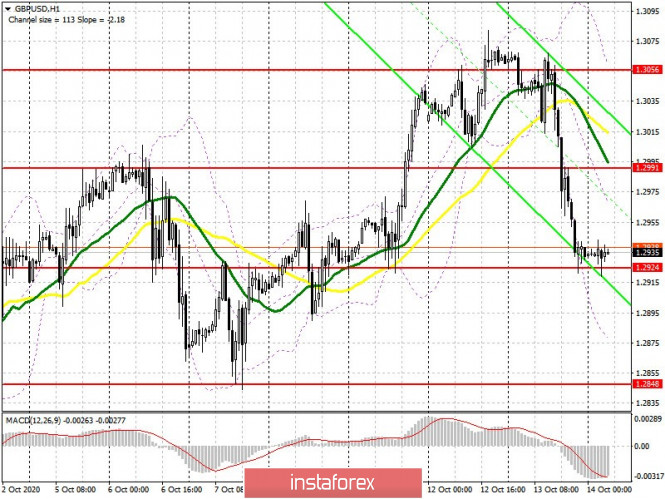 The Commitment of Traders (COT) report for October 6 showed a minimal increase in short non-commercial positions from 51,961 to 51,996. Long non-commercial positions slightly rose from 39,216 to 40,698. As a result, non-commercial net position remained negative and reached -11,298 against -12,745, which indicates that sellers of the pound retain control and also shows their slight advantage in the current situation. The higher the pair grows, the more attractive it is to sell.

Sellers still have the market under their control, but in order for bulls to completely surrender, we need a breakout and have the pair settle below support at 1.2924 by today. Testing this level from the bottom up in the first half of the day forms a good entry point for short positions in order for the downward trend to continue falling to the support area of 1.2848. The long term goal at the end of the week will be lows of 1.2807 and 1.2749, where I recommend taking profits. There is no need to rush to sell in case the pair recovers in the European session. The optimal scenario for entering short positions is when a false breakout has formed in the resistance area of 1.2991. You can sell the pound immediately on a rebound from the weekly resistance of 1.3056, counting on a correction of 30-40 points within the day.

Trading is carried out below 30 and 50 moving averages, which indicates a gradual return of the market under the bears’ control.

Trading plan for the EUR/USD pair on October 23. New record high on COVID-19 incidence; Growth in the US dollar.

GBP/USD: plan for the European session on October 23. COT reports. Pound buyers not in a rush to return to the market, will

Technical Analysis of GBP/USD for October 23, 2020