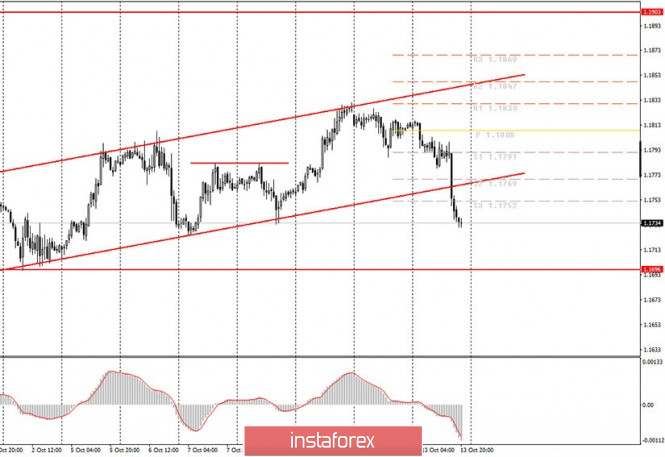 The EUR/USD pair continued the corrective movement on Tuesday, October 13, which gained strength by the end of the trading day, and the pair’s quotes left the ascending channel. Therefore, today’s trend for the pair has changed from an upward to a downward one, at least this is the conclusion that can be drawn at this time. As for today’s deals, there is absolutely nothing to analyze, since the MACD did not generate a buy signal. We do not recommend selling the pair in case the upward trend continues. Thus, novice traders were deprived of the opportunity to open long positions and received neither profit nor loss at the end of the day. Unfortunately, signals are not generated every day, this is the foreign exchange market. To minimize losses and maximize profits, you need to strictly adhere to a trading strategy. If it does not provide signals, then you should not enter the market. What’s next? Now we expect a downward movement in the coming days and even weeks. Tomorrow, quotes may pull back to the upside, after which it will be possible to search for entry points to open short positions in the EUR/USD pair.

Take note that today’s macroeconomic reports have absolutely nothing to do with the currency pair’s movement. Quotes only started to drop (dollar growth) a few hours ago, when the most important inflation report of the day was published in America. However, the main indicator was fully in line with forecasts and reached 1.4% y/y. The consumer price index, excluding food and energy products, reached 1.7%, that is, it did not change compared to August. Thus, we cannot call this data overly positive. Therefore, they could not provoke the rise in the US dollar. In the same way, the data from the EU could not provoke the fall of the European currency. Yes, the European reports turned out to be weaker than the forecasted values, but they were not important and meaningful. We can hardly assume that traders reacted to the EU economic sentiment report by selling off the euro.The same goes for the Business Sentiment Index and inflation in Germany. Thus, we can conclude that economic activity and investor sentiment in the European Union is beginning to deteriorate, but so far this does not mean anything serious.

European Central Bank President Christine Lagarde is set to deliver her next speech in the European Union on Wednesday, October 14 and, perhaps, this is all the news for the day. No reports for today according to the calendar of events. Thus, market participants will still have to primarily pay attention to technical factors and to the fundamental background, which cannot be predicted in advance. For example, news from the White House or the US Congress or the Federal Reserve will still have a high value for the dollar. However, no one knows in advance what Donald Trump or Steven Mnuchin or Jerome Powell will say this time. Thus, you need to be on the move to react to potentially important news.

1) Buy positions on the EUR/USD pair have ceased to be relevant at the moment, as the pair has left the ascending channel and will now form a new downward trend. Thus, in order to be able to consider new long positions on the pair, you should wait until new technical patterns appear, such as trend lines or channels, which would support the upward movement.

2) Sell positions have become relevant at the moment. However, following the results of the last few days, the EUR/USD pair dropped by 100 points in total. Therefore, it would be logical to assume that an upward correction will begin now. In any case, the MACD indicator needs to discharge after a strong fall to zero. Therefore, we advise you to wait for the pair’s correction, after which it will be possible to look for new sell signals.