Today the EUR/SD pair accelerated the downward move. At present, its price is making efforts to fix below support of 1.1750 (the median line of the Bollinger Bands which coincides with the Tenkan-sen line on the daily chart). The downbeat indexes in the ZEW survey and decent inflation data from the US triggered the downward move of EUR/USD. So, the pair entered its habitual trading range. Since September 30 until October 8, the currency pair was trapped in a narrow range of 1.1710-1.1750. The bears failed to enter the area below 1.17. On the other hand, the bullish momentum faded at near 1.1750. Then, amid the greenback’s weakness, the buyers were able to overcome the resistance level aiming for 1.18. However, the bulls found it hard to push the price higher.

EUR was weighed down by the figures in the ZEW survey. The business sentiment index for Germany tumbled to 56 points, the weakest score since May this year when Germany was restating the national economy after lockdown. Experts warned of a negative figure with a 2-point decline. In fact, the index slumped 20 points at once. The indicator came in at 76 in September. The figure for October revealed low morale among German businesses. 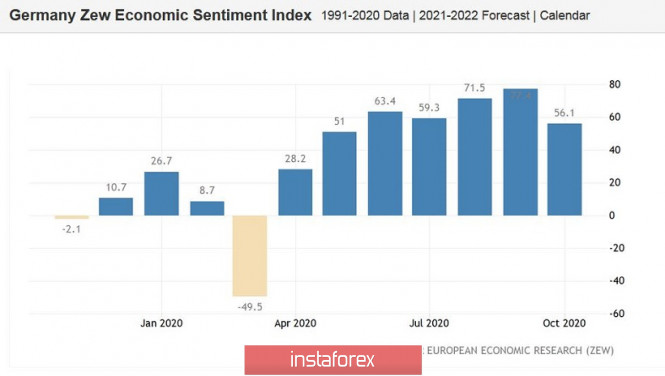 The index for the Eurozone showed a similar negative dynamic. The ZEW index for Eurozone surged to 72 points in September but it fell steeply to 52 in October. Following a burst of optimism in in the summer when the business sentiment was logging steady improvement both in Germany and the euro area in the wake of the pandemic, the business morale looks gloomy. This information is certainly bearish for EUR. In one of the recent comments, ECB President Christine Lagarde acknowledged that a series of macroeconomic indicators signal a new downturn in the eurozone’s economy. So, the economic outlook might be downgraded.

The latest news on the coronavirus front is dismal. For example, the largest European economy admitted that the second coronavirus wave is about to hit its national economy. The red alert has been announced in 28 cities and counties, including 3 cities with a million-like population such as Berlin, Munich, and Cologne. In the neighboring France, the number of COVID-19 patients in intense care wards has rebounded to the levels recorded 4 months ago. The situation remains challenging in the Czech Republic, where restrictive measures have been significantly tightened. And although representatives of the authorities of European countries unanimously assert that they do not intend to repeat the spring scenario, the mood in business circles has significantly deteriorated. The ZEW indices published today prove such prospects.

The US inflation data came in as expected. Both the headline CPI and the core CPI slowed down to 0.2% on month. In annual terms, the CPI rose to 1.4% while the core CPI remained flat at 1.7% like in the previous month. In other words, the US consumer inflation sank considerably on a monthly basis but keeps afloat on a yearly basis. 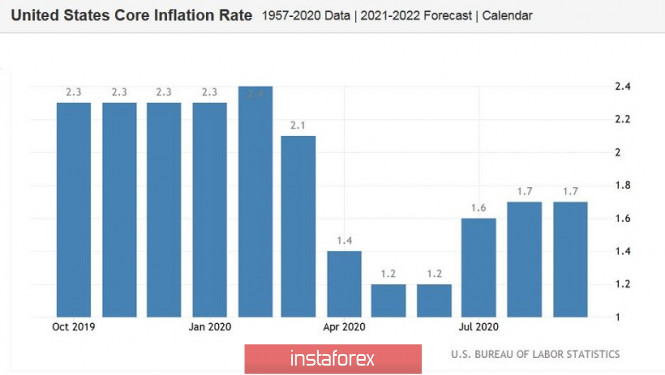 Nevertheless, from my viewpoint the ongoing decline of EUR/USD should be used as an excuse to open long positions. In essence, EUR lost the battle today but it has not been completely defeated by USD. In turn, USD found temporary support from the inflation data. However, it has to survive a tough challenge amid political jitters.

In addition, political battles continue over the notorious bill on new financial aid. Today, House Speaker Nancy Pelosi criticized the White House proposal, whose representatives agreed to increase the bill to $ 1.8 trillion. The Democrats still insist on their option of $ 2.2 trillion. At the same time, Pelosi clarified that negotiations are still underway at least until next Friday.

If the parties again fail to come to the common denominator, USD will lose ground and the buyers of EUR/USD will assert strength. Thus, considering the medium-term strategy, it would be a good idea to plan long positions with the main target at 1.1880 that the upper border of the Kumo cloud coinciding with the upper line of the Bollinger Bands on the daily chart. Speaking about the short-term strategy, it would be better to be in the wait-and-see mood because it is difficult to recognize a pivot point.