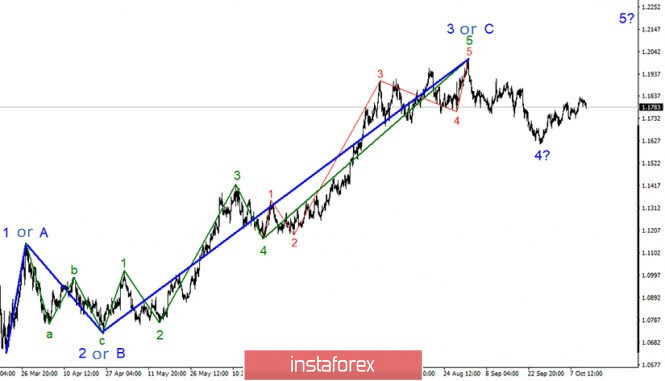 The wave marking of the EUR/USD instrument still looks quite convincing in global terms, and wave 4 is quite complete. Therefore, the main option remains to increase quotes from the current levels within the framework of building wave 5 with goals located above the maximum of the expected wave 3 or C. This means that the instrument will increase to at least 20 figures, and most likely even higher. At this time, there is no question of adopting a more complex form of wave 4. 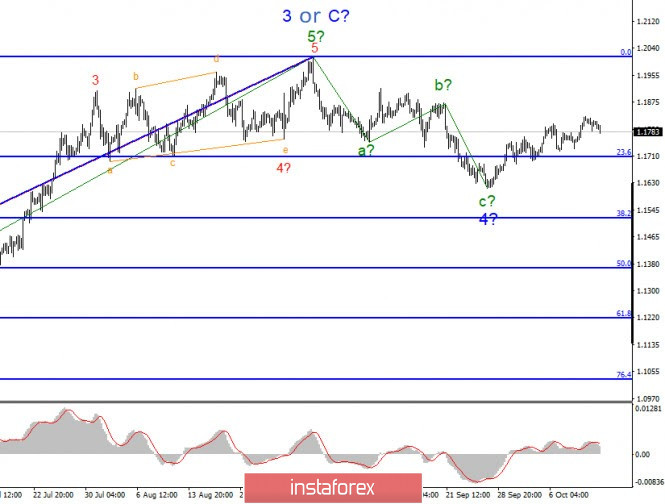 The wave markings of a smaller scale still show that the proposed wave 4 has assumed a three-wave form and is probably complete. If this is true, then the price increase will continue within wave 5. On Monday, the instrument lost only a few base points, which did not affect the current wave marking in any way. In general, the instrument continues to move steadily towards the 20 figure.

The US currency continues to enjoy extremely weak demand in the foreign exchange market and quite reasonably continues to decline in tandem with the euro. It was mentioned yesterday that negotiations between Democrats and Republicans on a new package of financial assistance to the American economy are carrying on, but the Democrats are firmly on their own and do not want to reduce their own offer of $ 2.2 trillion. While the two largest US parties continue their argument, the US economy is not getting much-needed help. However, all politicians already have more thoughts about the elections, which are about three weeks away. Many believe that future elections will be one of the most important in the history of the United States, and certainly one of the most interesting. Trump can cling to the President’s chair with his teeth and use any methods he can just not to give the victory to the democrat. Many experts believe that the case will almost definitely reach the US Supreme Court, as there may be fraud in the counting of votes. However, it is quite possible that this will be one of the most boring and predictable elections in the history of the United States. In recent months, the ratings of support for Trump and Biden showed that about 10% more voters are ready to vote for the Democrat. A few weeks before the election, many opinion polls showed that Biden’s support rating is only increasing and his advantage is already more than 12%. Opinion polls in the United States began in 1936, and since that time, no one has ever had more serious support than Biden has now. It is reported that no candidate has had more than 50% support since 1936, three weeks before the election. If we pay attention exclusively to social research, we can conclude that Biden already has a victory in his pocket, and even the courts won’t help Donald Trump.