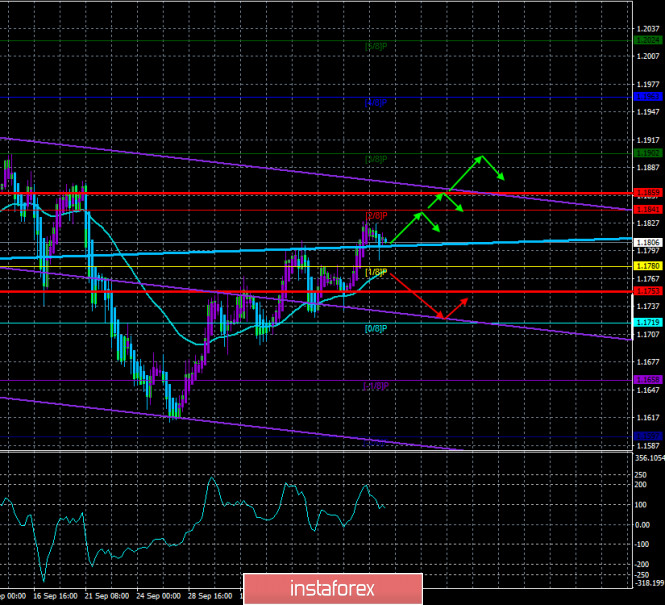 For the EUR/USD pair, the first trading day of the week was fairly calm and corrective. We were worried that the pair might go up sharply on Monday, contrary to common sense and traders’ expectations, however, nothing happened. A normal corrective Monday with a minimum of macroeconomic and fundamental information. The upward trend for the pair remains fully maintained, thus, after a small correction to the moving average, the movement to the north may resume. Recently, the pair’s quotes are very fond of bouncing off the moving average line to resume growth later. In general, the euro/dollar pair continues to trade in a very narrow price channel in the long term, with a width of no more than 300 points. This is a big channel for intraday or medium-term trading, but not for long-term trading.

The fundamental background for the pair did not change on Monday and could not have changed if only Donald Trump had not done something new and discouraging. However, none of this has happened, and the US currency continues its slow decline against the euro. We have already talked about this many times. In Europe, the economic situation remains more or less stable. The authorities are afraid of the negative impact on the economy of the second “wave” of the COVID-2019 epidemic, however, the virus is still more or less under control. At least in many EU countries. As for politics, the European Union is doing well on this issue. There is unity. At the key moment, the EU countries show their unity and commitment to a common goal, which helps to make the necessary decisions (like the budget for 2021-2027 or the fund for economic recovery after a pandemic). However, in the United States, the exact opposite of European reality. The number of daily recorded cases of “coronavirus” is so large and stable from day to day that it has even ceased to surprise anyone. The media write about the huge growth rates of the disease in France or the UK, however, they don’t even remember about the States, although 40-60 thousand new cases are still registered every day, and the total number of infections has already exceeded 7.7 million. However, in the near future, the States may be pushed back from the first place of this anti-rating by India, which already has 7.1 million diseases. However, this fact can hardly console the US and the US currency.

Politics in America is even worse. Many media outlets and experts are now wondering whether Donald trump’s COVID-2019 infection was staged? There is an opinion that Trump understands that it is the issue of the epidemic and the fight against it that can cost him victory in the election and is trying to belittle the seriousness of the virus in the eyes of voters. At the very least, Trump’s infection three weeks before the election and his easiest recovery in 10 days raise some doubts about this issue. Moreover, Trump is quite capable of anything from the category of not quite fair play. The US leader has done other things before. Therefore, Trump may not have any illness at all. With this false illness, the president probably wanted to show that he (a 74-year-old elderly man with a decent excess weight) was easily and calmly cured of the “coronavirus” using the usual medications available to everyone. Will Americans believe him or not? The result will be known after the election.

Also, the issue of providing a new package of assistance to the American economy and American citizens is not being resolved and is not moving forward. According to not fully confirmed information, Steven Mnuchin had a conversation with Nancy Pelosi, during which he proposed a package of $ 1.8 trillion. According to preliminary information, the Democrats will refuse this offer, however, negotiations are still ongoing between the parties, and the difference in views on the scale of assistance to the American economy is less and less different (the Democrats insist on $ 2.2 trillion). Thus, there is still hope for reaching an agreement, but quite unexpectedly, several dozen Republican senators criticized this new project, calling it “excessively expensive”. Thus, this aid package can be blocked by the Senate. The meaning is completely different. There are about three weeks left until the elections, and if the parties do not agree in the near future, then a week before the elections, no one will deal with this issue. For Trump, this stimulus package is still a way to increase his popularity among voters (the president wants to give Americans $ 1,200 in checks with his signature), and for Democrats, it is a way to provide comprehensive assistance to the American economy. However, for example, White House economic adviser Larry Kudlow believes that the Senate will still approve the aid project if Democrats and Republicans eventually agree.

Well, the US dollar does not react to this information. Market participants do not need hopes to help the economy in the future. Market participants are waiting for the improvement of the epidemiological situation, resolution of the political crisis, completion of elections, and all processes related to them (for example, legal proceedings on the grounds of possible fraud). And while this is nothing, they simply do not see any reason to buy the dollar. The euro currency also becomes more expensive very reluctantly. But here everything is easily explained. The euro has grown by 1,300 points since April, so this is its strongest period of growth since 2017. Traders are simply wary of continuing to buy the European currency near its two-year highs. If the pair still corrected down by 500-600 points, buyers would cheer up and resume long positions at relatively low price values. However, there was no strong correction. There was a two-month flat, and the way the pair is currently trading cannot be called a trend movement. Thus, we continue to stand by our opinion, which was voiced a few weeks ago. The US currency is unlikely to be in demand before the election. It may remain inside the 1.1620-1.1940 channel, which, although not completely sideways, is still close to it. 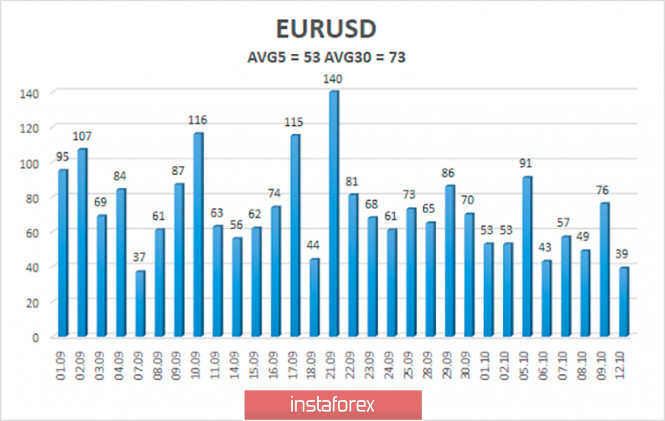 The volatility of the euro/dollar currency pair as of October 13 is 53 points and is characterized as “average”. Thus, we expect the pair to move today between the levels of 1.1753 and 1.1859. A reversal of the Heiken Ashi indicator back to the top may signal the end of the next round of corrective movement.

The EUR/USD pair continues to be located above the moving average line and has started a new round of corrective movement. Thus, today it is recommended to open new long positions with targets of 1.1841 and 1.1859 after the Heiken Ashi indicator turns up. It is recommended to consider sell orders if the pair is fixed below the moving average with the first targets of 1.1753 and 1.1719.