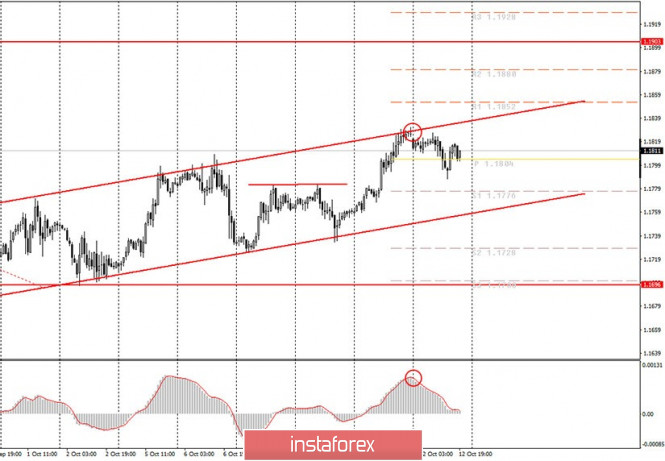 The EUR/USD pair began the expected corrective movement on Monday, October 12, rebounding from the upper line of the ascending channel. At the moment, it is clear that there will most likely be several rounds of a downward correction, since an upward pullback followed after the first round. Thus, the euro/dollar pair can still go down to the area of the lower line of the ascending channel. And rebounding from this line would be an ideal signal to open new long positions. Unfortunately, the MACD indicator gave a false signal to traders today. Its upward reversal could be regarded as a buy signal, but in reality the price did not go up any further and the indicator turned down again on the next candlestick. Losses on this deal could be about 10 points, which is not a lot. Therefore, novice traders can expect this correction to continue. Also in the morning we admitted the possibility of opening short positions when rebounding from the upper channel line, but we called this option risky, because it involves trading against the trend. Nevertheless, traders could earn several tens of points of profit on this trade.

There is absolutely nothing to note in terms of macroeconomic news on Monday. However, the fact that there was no news and reports that day is evident from the pair’s volatility. Only 39 points were passed from the low to the high of the day. Even the speech of the head of the ECB Christine Lagarde did not change the situation, since the topic of monetary policy was not touched upon. Lagarde talked about creating the digital euro and its advantages over fiat money. There was nothing more interesting in her speech. There was even little news from the White House and from US President Donald Trump. Democrats and Republicans still cannot agree on providing a cash aid package to all the citizens and sectors of the US economy in need. Therefore, the US dollar may continue to fall moderately.

Several minor macroeconomic reports from the European Union are scheduled for Tuesday, October 13, but the most important report will be published in America. The consumer price index for September will be released in the afternoon, which is forecast to rise to 1.4% y/y. In general, inflation in the US has been pleasing lately. Recall that both the ECB and the Fed are targeting stable inflation at 2% y/y. However, inflation in the eurozone has been negative for three consecutive months. And it is only slightly below the target in the United States. However, one should not be prematurely happy and prepare buy positions on the dollar. Inflation in the US is relatively high because the dollar has dropped quite seriously over the past six months against a number of currencies. The same is true for the eurozone. Inflation in the EU is low because the euro has appreciated strongly against the dollar.

1) Buy positions on the EUR/USD pair remain relevant at the moment due to the fact that the upward trend line was canceled, and a rising channel was formed. However, we still advise novice traders to wait for the price correction to the lower area of this channel, as well as for the MACD indicator to discharge to zero. Afterwards, you can finally open new long positions with targets around 1.1800 and slightly higher.

2) Sell positions have lost their relevance at the moment. Traders could have earned several tens of points on the signal of a price rebound from the upper channel line. However, at this time, we would not recommend opening new short positions. To do this, you need to wait until the current upward trend has been cancelled, that is, for the price to settle below the upward channel.