At the auction on October 5-9, the British pound strengthened against the US dollar, like the vast majority of major currencies. The growth of the GBP / USD currency pair was 0.86%. Whether this caused a weak dollar or a strong pound is a moot point and can be interpreted in different ways.

In spite of the fact that the strengthening of the second wave of COVID-19 in a number of European countries and in the UK, the US dollar has still lost demand as a safe asset, which once again can be considered as a factor of unpredictability of market sentiment. In the meantime, restrictions are being reintroduced in the UK, which are causing discontent among a significant part of the population. In particular, the difficult situation with the spread of COVID-19 has developed in Scotland, where pubs, cafes, and restaurants are closing one after another. The authorities of this country, which is part of the United Kingdom, are trying to reassure citizens and calling the measures to close the places so beloved for British recreation temporarily and forced. Scotland is experiencing an outbreak of the coronavirus pandemic and an increase in the number of infected COVID-19 has almost filled hospital beds. But if we give consideration to the latest data that about 30 people are in intensive care wards and the fatal outcome was recorded in five, the situation is not as heavy as in the top three countries most affected by a new type of coronavirus infection, which are India, USA, and Brazil. However, inaction can be very costly and proactive measures must be taken to prevent the further spread of the insidious infection. If earlier someone believed that the story of the coronavirus pandemic was provoked artificially and is not worth the time, now people are having second thoughts about its very serious challenge to all of humanity. People get sick and die from COVID-19, and not only ordinary individuals, but also famous personalities. Despite this, the 45th President of the United States, Donald Trump, who has a mild form of the disease, does not pose a threat to the life of the American leader, according to the White House administration. As a further matter, the discussion regarding the transfer of powers to the Vice President of the United States, Mike Pence, does not even come up. Trump is fully ready to continue performing his official duties as President of the US, and he has enough work. That is just the negotiations with eternal political opponents from the democratic camp on the adoption of a package of stimulus measures to maintain and restore the American economy. It is worth recalling that after negotiations on this issue between the speaker of the US house of representatives Nancy Pelosi and Treasury Secretary Steven Mnuchin reached an impasse, Donald Trump decided to take a break and stop trying to find a compromise. I suppose that this factor did not contribute to the weakening of the US currency.

As shown on the economic calendar, the main events for the GBP / USD pair will be data on the UK labor market, as well as the US consumer price index. It is typical that both reports will be published on Tuesday, October 13, and may cause increased volatility in trading on the pound / dollar currency pair. 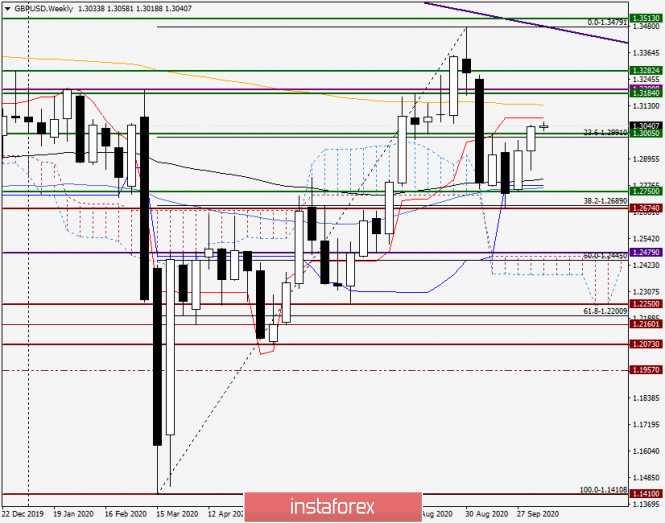 In this time frame, it can be seen that GBP / USD is showing growth for the second week in a row. At the same time, trading over the past five days ended at 1.3036, above the landmark psychological level of 1.3000. However, the strong technical mark of 1.3047 is a little higher, ergo it is too early for the pound bulls to celebrate the final victory over their opponents. It is also highly advisable to pay attention to the red line of the Tenkan line in Ichimoku indicator, which runs at 1.3076 and can also provide serious resistance to attempts to further growth. The same fully applies to the 200 Exponential Moving Average, which is located at 1.3135 and is also ready to resist possible attempts to continue the rise.

If we indicate the players’ goals for a lower rate, then strong support is in the area of 1.2800-1.2750, where the 89 EMA, Kijun line, and 50 MA are located. This price zone itself is quite strong. Do not discount the support level of 1.2674, where the minimum trading values of the week before last were shown. In my own opinion, only a true breakdown of this level will indicate the control of bears in the market for GBP / USD. It is no coincidence that after the growth of 1.1411-1.3479, the pair corrected to the second retracement level of 38.2 Fibo, where it found strong support and began to recover. Once again, the pound sterling flashed excellent technology! 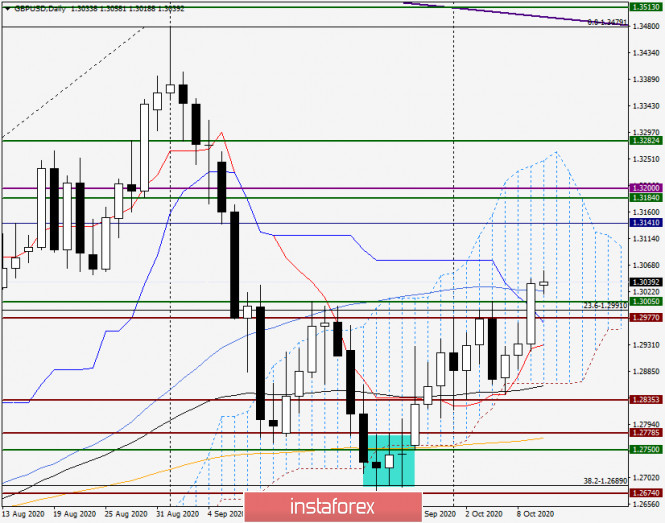 On the daily chart, the pair is in the middle of the Ichimoku cloud indicator. At the same time, trading on October 9 ended with an impressive increase and closed not only above 1.3000, but also above the Kijun line and 50 MA. I would venture to assume that the final superiority of the bulls on the instrument will be indicated after the exit up from the cloud, the upper border of which passes in the area of 1.3250.

It can be assumed that the main scenario this week will be the continuation of the growth of the British currency. If this happens, then it is worth considering opening long positions on the rollback to the broken 50 MA and the 1.3000 mark, from the 1.3025-1.3000 price zone. For today, the pound / dollar currency pair is everything, but tomorrow, we will observe smaller time frames and try to identify more options for positioning.

Successful and profitable trades to all of you!

Dollar pares slight losses as the session gets underway