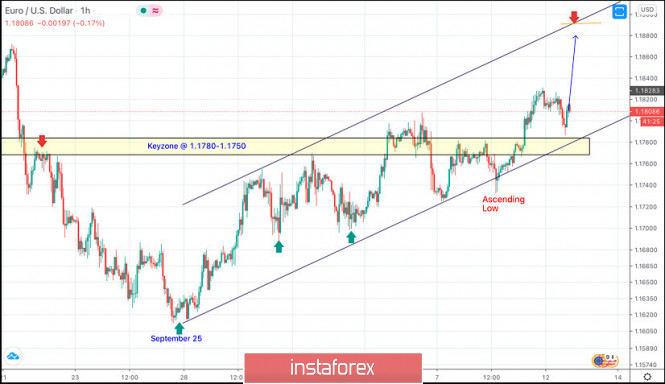 Instead, recent ascending movement has been established within the depicted movement channel leading to bullish advancement towards 1.1750-1.1780 which failed to offer sufficient bearish pressure.

Intraday traders should have noticed the recent breakout above 1.1750 as an indicator for a possible bullish continuation towards 1.1880 where the upper limit of the movement channel comes to meet the pair.

Hence, the price level around 1.1880 remains a targeted level for Intraday Traders as long as bullish persistence above the depicted KeyZone of 1.1750-1.1780 is maintained.

Any downside pullback towards 1.1750-1.1780 should be considered for bullish reversal hence, a valid Intraday BUY Entry.

Conservative traders should wait for the current bullish pullback to pursue towards the upper limit of the movement channel around 1.1880-1.1900 for a valid SELL Entry.