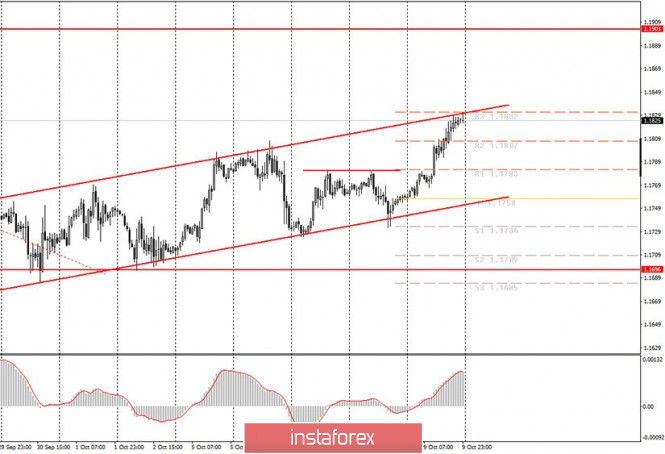 The EUR/USD pair continued to move up on Friday, October 9, instead of moving down after it broke the rising trend line. This is what we have been talking about recently. Trading the pair often takes place in a not quite standard way, which leads to such movements that are not quite logical. However, in any case, beginners should not have received any losses on Friday, since we recommended trading down, and not a single sell signal was generated that day. But now we have formed a new upward channel, which supports bull traders. However, there are problems with this channel. The price is already near its upper line and rose by 100 points on Friday. Thus, it is now absolutely necessary to wait for the downward correction if you are considering buy options for the EUR/USD pair.

There was absolutely nothing to take note of in terms of Friday’s macroeconomic news. The news calendar was completely empty in both the European Union and the United States. However, as is often the case, strong movement happens exactly when you are not expecting it. Actually, this is what happened on Friday. The US dollar went back to depreciating against both the pound and the euro, based on the same factor which is the upcoming elections and the sheer political confusion that reigns in America right now. Therefore, market participants simply returned to placing sell positions on the dollar from time to time, which are based on a negative fundamental background. One could note the fact that Republicans and Democrats again failed to agree on a new package of financial assistance to the American economy, and US President Donald Trump ordered to suspend negotiations altogether until the elections are over, but then again they have not been able to come to an agreement since early August. Nothing new here.

We can expect speeches from European Central Bank President Chrisitine Lagarde, and ECB Vice President Luis de Guindos on Monday, October 12. These two figures have recently been speaking almost every other day. Nevertheless, we still do not expect any fundamentally new information from them. We also do not expect a change in the fundamental background for the euro/dollar pair. Thus, a not too strong upward movement with frequent pullbacks and corrections is likely to continue.

1) Buy positions on the EUR/USD pair have suddenly and unexpectedly become relevant at the moment since the upward trend line was canceled, and an ascending channel was formed. However, first you need to wait for the price correction to the lower area of this channel, and the MACD indicator to discharge to zero. After doing so, you can finally open new long positions with targets around 1.1800 and above.

2) Selling has lost its relevance at the moment, but the most interesting thing is that the quotes will most likely begin to fall on Monday, since the price reached the resistance level of 1.1832 and the upper line of the ascending channel on Friday. Thus, the probability of a 50-60 point downward correction is extremely high. The most risky traders may even try to work out this pullback, but we advise you to take restrictive Stop Loss orders. In general, short positions will become more attractive when the price settles below the rising channel.