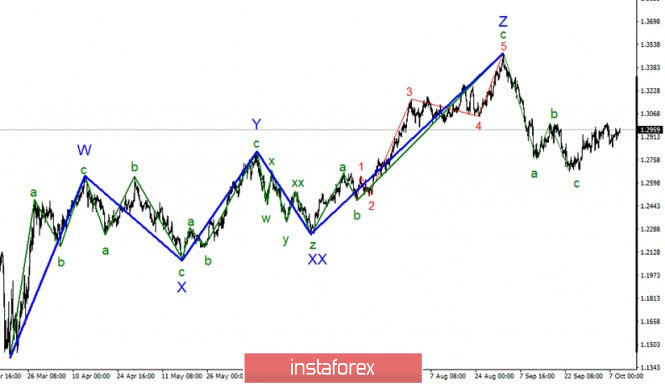 The construction of a new downward trend section is expected to continue. However, the current wave markup is so ambiguous that it suggests several possible scenarios at once. For example, the second corrective wave of a new downward trend section will take a three-wave form. The instrument’s decline may resume from the current values. Another example is the entire downward wave that begins on September 1 may already be completed and the entire section of the trend that begins in March will take an even more complex form and the price increase will resume. The last option can be determined by a successful attempt to break through the 30th figure. 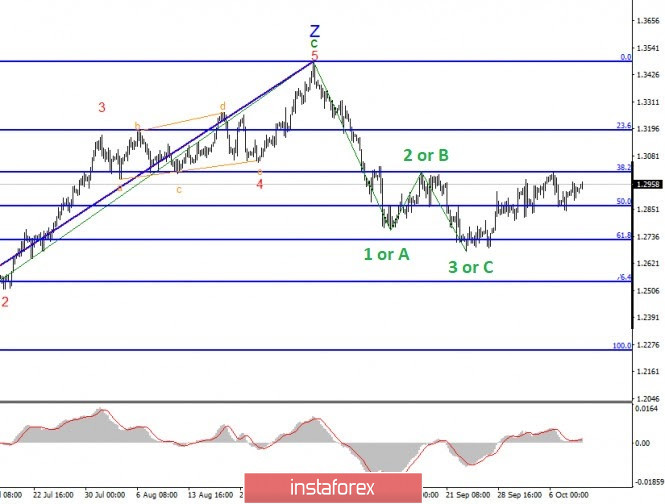 On closer inspection, it is clear that the wave marking really took a three-wave form and at the same time looks quite probable. The failed attempt to break the 61.8% Fibonacci level only further assures me that the descending set of waves is complete. An unsuccessful attempt to break through the 38.2% Fibonacci level suggests the idea of building a new downward wave. Thus, to expect a new rising wave, I recommend waiting for the breakout of the 30th figure. Otherwise, I will expect a resumption of the decline in the instrument’s quotes.

Yesterday, markets were roiled by statements from Bank of England Governor Andrew Bailey. The head of the central bank said that the regulator closely monitors the economic and epidemiological situation. If the situation with the Coronavirus pandemic in the UK continues to deteriorate, the central bank will be ready to intervene and influence the situation by lowering the key rate or expanding the quantitative easing program. The statement is really loud, but I must say that it is not unexpected. In the past six months, if not more, the market has firmly settled rumors that the Bank of England is preparing to lower the rate in the negative area. There are also very specific reasons for this: the General decline in the British economy, the difficult situation with a new outbreak of COVID-19, and absolute uncertainty about the future relations with the European Union, both in trade terms and in legal terms. All this affects the economy and its prospects. Thus, at the beginning of the year, it was clear that if the situation continues to deteriorate, the rate will continue to decline. The economy will require additional stimulus and the Bank of England will simply have no other options. Moreover, many expect such decisions from the regulator before the end of the year. We can already say that the second wave of the pandemic will be much more serious than the first. In any case, the UK economy will start to shrink again from January 1, 2021.

The Pound-Dollar instrument is expected to have completed the construction of a downward trend section. However, until there is a successful attempt to break the 38.2% Fibonacci level, I would recommend not to rush with new purchases of the Pound. A breakout of the 30th figure will indicate that the markets are ready for new purchases of the pound and further increase in quotations. In this scenario, I recommend buying a tool with targets located near the 1.3191 and 1.3480 marks (23.6% and 0.0% Fibonacci) for each new MACD signal upwards. Sales are more difficult now, but in any case, they should not be opened before a successful attempt to break through the 50.0% Fibonacci lev